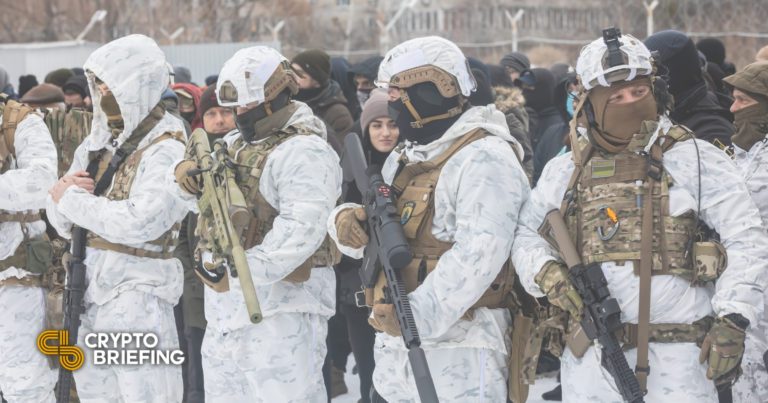 Markets Tremble Amid Threat of Russian Invasion of Ukraine

Crypto and stock markets have suffered today, possibly in connection to fears surrounding Russia’s ominous positioning of over 100,000 troops on the border of Ukraine.

Threat of War in Ukraine

Markets appear to be shaken today by uncertainty surrounding the threat of a possible Russian invasion of Ukraine.

Though there is no confirmation that any such orders for an invasion have been given, U.S. National Security Advisor Jake Sullivan said today that “we’re in a window when an invasion could begin at any time.”  Russia has more than 100,000 troops amassed near the Ukrainian border, and the Biden Administration has urged Americans to leave Ukraine multiple times this week.

The crypto market is down around 4.8% in terms of total market capitalization amid the fears, with the two major coins, Bitcoin and Ethereum, roughly mirroring that level of loss. Stock market indices are down as well today, while so-called “fear” assets like gold have jumped in price.

Importantly, the U.S. has not confirmed that Russian President Vladimir Putin has made a decision to invade Ukraine. However, Sullivan said that Russia’s current military posture in the region now puts it “in a position to be able to mount a major military action.”

However, there are reportedly U.S. officials who told PBS correspondent Nick Schifrin that they do have reason to believe that President Putin has made the decision to invade Ukraine. U.S. Secretary of State Antony Blinken has also expressed concerns over “troubling signs of Russian escalation,” himself saying an invasion could “happen at any time.”

Russian Foreign Minister Sergey Lavrov has accused Western politicians of blowing the situation out of proportion, calling worries about the buildup of Russian troops “sheer propaganda.” Russian officials deny that it is planning any invasion, instead insisting that it is enforcing “red lines” to make sure Ukraine does not join NATO.

The Prime Minister of Britain, Boris Johnson, called the Russia and Ukraine situation “the most dangerous moment” Europe has faced in decades.

Ukrainian volunteer groups organized to defend the nation against Russian invasion received a 900% increase in Bitcoin donations in 2021, according to a report today. Defense Funding by Crypto Ukrainian…

What is a Crypto Airdrop: Why Projects Airdrop Crypto

Crypto airdrops occur when new tokens are freely distributed to different wallets in order to drive initial growth and build a community. They represent a popular marketing tactic that new projects use to spread…

Ukraine’s lawmakers have voted in favor of legalizing crypto ownership and businesses operating in the space. Ukraine Gives Citizens Right to Own Crypto Ukraine has become the latest country to…

Belarus, Ukraine And Russia: Time To Revisit Their Tech?

Since the fall of the Soviet Union, the Eastern European region has endured growing pains. However, one thing the newly formed countries could always hang their hat on was a…