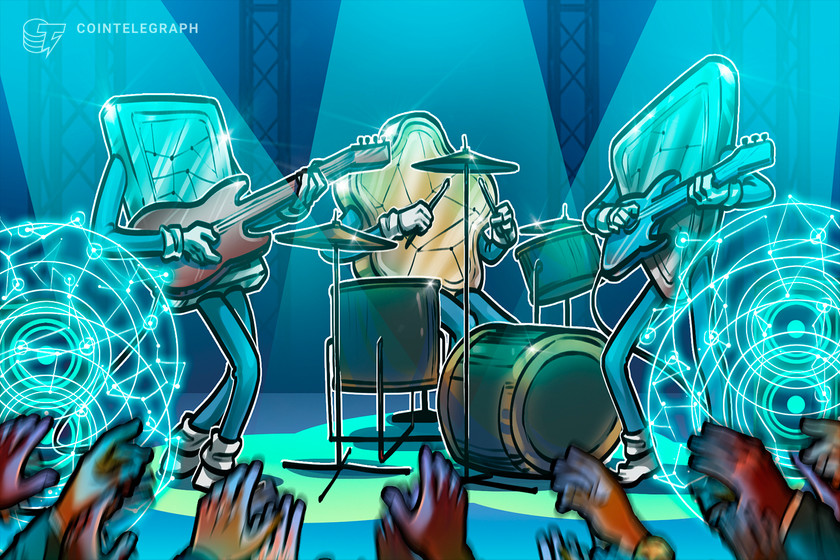 American singer-songwriter John Legend is solidifying his position among the ranks of celebrities flocking to the world of nonfungible tokens (NFTs), helping to launch a new NFT platform for musicians and other entertainers.

The platform called OurSong allows artists to tokenize and sell their work, awarding buyers with privileges like access to unreleased music and private chatrooms.

“Everyone can now turn stories, music, photography, and any kind of art into NFT trading cards called Vibes,” the platform states. “Vibes allow you to unlock exclusive updates and access private chat communities where you can meet like-minded others.”

Legend will act as Chief Impact Officer, tasked with attracting up-and-coming artists and their fan bases.

In an interview with Bloomberg, Legend said that although he spends most of his mental energy thinking about music, he hopes the platform will help to connect people.

“When I think about what I want to do, I try to get involved with projects that I think will make the world more connected.”

Well known names attached to the project, including the cofounder of digital music streaming service KKBOX, Chris Lin, who will serve as the new company’s CEO. Cofounder of the live video streaming platform Twitch, Kevin Lin, and founder of early-stage venture capital firm Cherubic Ventures, Matt Cheng, will also be joining the team.

According to Lin, the platform won’t require users to have a crypto wallet. According to the Terms of Service you can only buy Vibes with OurSongDollars (OSD). “You can deposit OSD in OurSong by purchasing it with credit card, debit card, wire payment, or USD Coin deposited in your wallet on Circle’s blockchain,” it states.

The musician and his co-founders didn’t provide any additional financial details about the project.

This isn’t Legend’s first foray in the world of NFTs. In May 2021, Legend was announced as a partner of the “OneOf” NFT platform among the likes of Doja Cat and Whitney Houston.

Related: The Metaverse will change the live music experience, but will it be decentralized?

He isn’t the first celebrity to dip his toes in the world of NFTs and cryptocurrency either, although most celebrities opt to mint their own collection rather than creating an entire platform.

One notable exception is the Super Bowl champion Tom Brady, who launched a sports-focused NFT platform called “Autograph” in April 2021.

Although many big names are keen to get involved in the space — such as Paris Hilton, who recently announced she would be dropping her first NFT collection with Superplastic — others aren’t so impressed.

Most recently, Kanye West dragged the NFT world in an Instagram post, writing ““Do not ask me to do a f*cking NFT.”